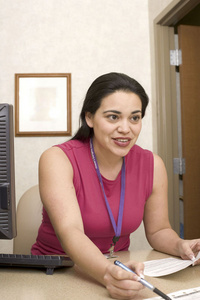 Identification of primary care patients needing behavioral health intervention and a clear pathway for them to get it are essential for successful integrated programs. Many of the behaviorally-oriented assessment tools discussed in the Select  Global Outcome Measures and the Select Problem and Population Outcome Measures Sections of this website can serve as both screeners and outcome indicators. They are used initially not only to detect behavioral problems, but to establish a baseline against which clinical progress can be measured. They can then be readministered periodically to assess client both improvement and program or provider effectiveness.

IBHP, this website host, has created a new electronic quick reference guide of screening instruments for behavioral health professionals in conjunction with CPCA and its Behavioral Health Network.  “Integrated Behavioral Health Screening Tools for Primary Care” is designed to provide hotlinks to screening tools and resources recommended for use in primary care.  Instruments are grouped by those relating to general health and welfare; pediatrics; mood and anxiety disorders; and substance use disorders, as well as other conditions.  Many of the forms have been translated into multiple languages.  To access an individual instrument, open the document on a computer or hand-held device, click on the blue type and review, download or print the tools and/or click the website link for more information.

Other screening instruments can be found in the Operational Forms section of this website.

Buncombe County has developed  screening tools geared to stress and functional levels, to anxiety and to general functioning.  Sierra Family Medical Clinic, one of IBHP’s grantees, is using the Mini-Mental Exam/Health Survey to get a snapshot of their patients’ physical and mental health at intake.  The Brief  Behavioral Health Screening Questionnaire asks five simple questions to assess depression as well as cigarette, alcohol and drug use.  The Center for Integrated Primary Care at the University of Massachusetts Medical School assembled questions from the PhQ-9, the GAD-7, the PC PTSD and the AUDIT – covering depression, anxiety, post-traumatic stress and alcohol use – to form a two page self-administered instrument called the Patient Stress Questionnaire that is also available in Spanish.

The PH-Q-9, a nine item self-administered questionnaire, has probably been the most frequently utilized measure to capture the patient’s level of depression.  Rather than initially using this questionnaire, many clinics just embed the first two items in their general intake form (PHQ-2): “Little interest or pleasure in doing things” and “Feeling down, depressed or hopeless” and use positive responses to trigger administration of the PHQ-9 and/or immediate referral to the behavioral health counselor.   The PHQ-9 has also been modified for teens (see Teen Screening below).

To detect post-natal depression, the Edinburgh Scale has  been widely used, but researchers have found that  a three question subset of questions worked just as well as conventional screening.  New mothers were asked to answer “Yes, most of the time,” “Yes, some of the time,” “Not very often” or “No, never” to the following statements:

On the other end of the mood spectrum, the Mood Disorder Questionnaire (MDQ), developed by psychiatrists, consumer advocates and researchers, focuses on the manic side of bipolar disorder.

Substance and Alcohol Use

Similarly, a few trigger questions such as “Do you use illegal drugs like speed, heroin or cocaine?” or “If you drink alcohol, how many drinks in a typical day?” can trigger further inquiry.

A few fairly simple questions, from the CAGE questionnaire, have also been shown to detect the majority of clients with alcohol problems(those giving two or more positive responses):

The Alcohol Use Disorders Identification Test (AUDIT), developed in 1982 by the World Health Organization, is also a simple way to screen and identify people at risk of alcohol problems.  NIDA (the National Institute on Drug Abuse) website also has an on-line Screening for Drug Use in General Medical Settings to determine past use of various substances.  The National Institute on Alcohol Abuse and Alcoholism has developed a brief screening algorithm for alcohol abuse and dependence with guidelines on how health professionals should proceed depending on responses.  For a screening instrument designed especially for teens, CRAFFT, see Teen Screening below

Buncombe County in North Carolina developed a simple five-question tool, easily be appended as a red-flag indictor to a general medical intake questionnaire, which touches on drug and alcohol abuse, depression, anger, and anxiety.  The responder checks “never”, “rarely”, “sometimes” and “often”:

Some clinics rely on the GAD-7, a seven question self-administered form to measure generalized anxiety and/or theDASS-21, which measures depression, anxiety and stress. Another recently developed anxiety assessment tool isCUXOS (Clinically Useful Anxiety Outcome Scale), developed by the Department of Psychiatry at Rhode Island Hospital.  The questionnaire, which takes about 1.5 minutes to complete, has been show to have both high internal consistency and test-retest reliability.

Teen Screen Primary Care, developed by Columbia University, contains the PSC-Y, a pediatric symptom checklist, along with a PHQ-9 modified for teens and the CRAFFT to detect alcohol and substance use for adolescents ages 11-21.  The Vanderbilt ADHD Diagnostic Parent Rating Scale is a 47-item questionnaire completed by parents about their child geared to detects hyperactivity, oppositional behavioral, and conduct disorder as well as anxiety and depression.  The Modified Checklist for Autism in Toddlers (M-CHAT) is available, with some specified conditions, to detect autism spectrum disorders in children between 16 and 30 months old.

The AD8 is a broad and brief (8 item) screening interview to detect changes that indicate cognitive and memory problems.

See the Operational Forms section of this website for more screening instruments.