The literature is replete with studies showing the inexorable and undeniable link between mental and physical health.  For an excellent overview of the relationship between mind and body, read the Robert Wood Johnson’s “Mental Disorders and Medical Co-Morbidity” written by Benjamin Druss and Elizabeth Walker, 2011.  The paper cites data indicating that 25% of the adult population have a mental disorder and 58% had physical conditions.  Of those with a mental disorder, 68% had co-occurring medical conditions.

In April, 2012, the National Survey on Drug Use and Health published data demonstrating the strong relationship between physical and mental health.  Data showed that adults with mental illness were significantly more likely to have high blood pressure, asthma and stroke and more apt to utilize ER’s and hospitals than others.  The Center for Integrated Health Solutions prepared a chart illustrating the strong link between physical and mental disorders. The National Association of Mental Health Program Directors recently published another excellent resource, “Morbidity and Mortality in People with Serious Mental Illness”.

Another overview exploring the relationship of psychiatric and physical disorders is “The Vital Link between Chronic Disease and Depressive Disorders”, by Daniel Chapman et al., 2005.  Among other informative sources is the journal article “Depression and co-morbid medical illness: therapeutic and diagnostic challenges” by F. George Leon et al, Journal of Family Practice, Dec. 2003.

As part of California’s CalMEND program, Dr. Cheryl Cashin examined nonpsychiatric hospitalization rates among MediCal beneficiaries with serious mental disorders and found they had a significantly higher frequency, even relative to other high need populations.  For a Powerpoint of her findings and data, go to “Excess Nonpsychiatric Hospitalization and Emergency Department Use among MediCal Beneficiaries“. 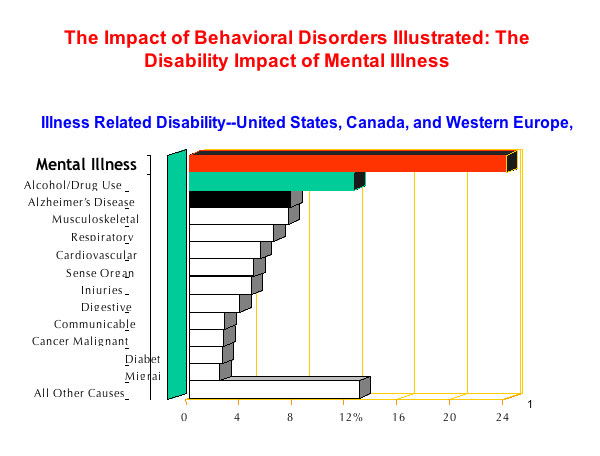 Taken from the World Health Organization, 2001, as presented by David Shern, 2008.

Here’s some of what the research in this area has shown: 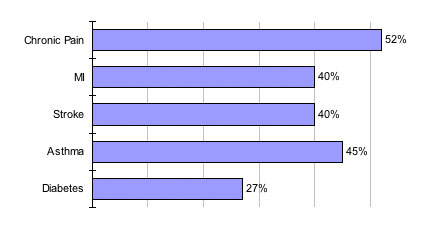